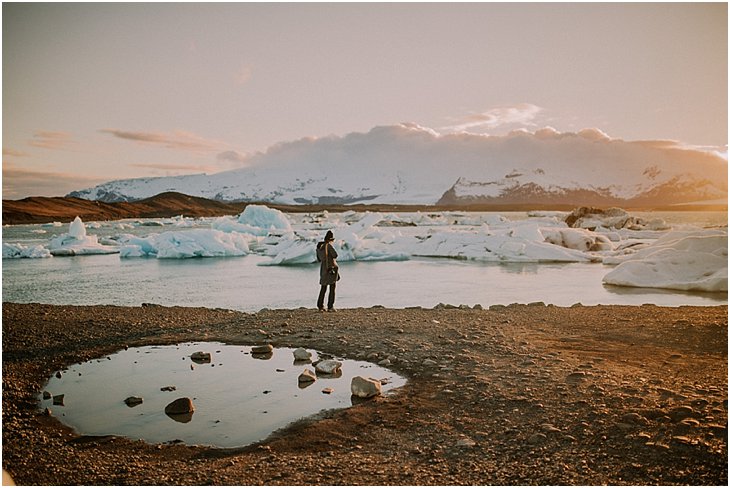 I visited Iceland for a 2nd year in a row in April. This time I took my photo buddy Niccola with me. And there were other reasons to do the Iceland Roadtrip edition 2017: one of my couples booked me for their engagement session (result: see herrreeeeee) and my friend Nicole was staying at a horse farm in the South for a few months. Enough reasons to go back, isn’t it?

After arrival at the airport, we headed straight to Reykjanes Peninsula for the planned engagement session. Sun was out. We couldn’t wish for better circumstances. After shooting, we enjoyed one night at a cosy AirBnB close to Reykjavik, were the sweetest puppy lived.

The morning after, we went grocery shopping and hit the road. Weather had turned. Storm was coming. Our BnB hosts had warned us that the next 24hours would be verrrryyyy stormy, especially the direction we were heading. So we had to promise to frequently consult the Icelandic weather forecast and check the road conditions. We were warned. Morning hours were cloudy but still ok, but the wind kicked in with the hours passing by, skies became darker, and our planned hike to Glymur waterfall had to be stopped somewhere halfway because the winds made us lose our balance.

Somewhere around 8PM, and many road blocks and huge detours later, we finally arrived at the last straight road to Olafsvik. The northern road was blocked so we had to take the whole way back to reach town via the southern route on Snaefellsnes Peninsula. And oh boy. Were we glad we were driving a medium class 4WD. Ok it was a Dacia, but our Duster was loved. I can’t describe how we felt that last hour in the car. It was like the earth was coming to an end. Horrendous winds, tons of liters of rain, and our car was a toy for the weather gods. I tell you, both Niccola and myself are not easily afraid, but the last 15 minutes of our quest, with Niccola staring to Google Maps like ‘OK, 6 more minutes’ – ‘Ok, 2,5 minutes’… and just silence in between (except for the sound of rain and wind) and me holding on to the steering wheel like I was hunted by a serial killer… hahaha. Both praying that our car wouldn’t be pushed over while we were driving the last kilometers with the ocean left of us and another pond right of us. We almost pissed our pants, but made it. Parked the car between other vehicles, managed to get out and ran up the stairs of our hostel. We didn’t dare to come out anymore, cooked a simple meal and had a pint or two.

The next morning, skies were blue. Ocean was quite and we were happy to explore the beautiful Snaefellsnes without fear. We first explored the southern coastal route and then crossed the peninsula to do the same on the north side. Arnarstapi in the south and Kirjufell Mountain and Waterfall in the north, were very impressing, I have to say.

I’m in love with this picture Niccola took of me.

And later that day (yes we drove for hours) we did a small part of the Golden Circle because some spots you just have to see. Snow hit in again for a short time, and we drove further south, to finish the day at Seljalandsfoss area. We went all the way in – under – between the two waterfalls there, and finished our day at Skalakot, the horse farm where my friend Nicole was working for half a year. It was a happy reunion. We went out for dinner, had some beers and talked for hours.

The next day we went for a short but fun horse ride. Like, what are the chances that a friend of yours is a horse farm guide in Iceland, right? Niccola never did horse riding before, but she did really great! At noon, we hit the road again, further on the Ring Road, with final destination Jökulsarlon, aka the Glacier Lagoon. Last year, I didn’t go further than Kirkjubaerjarklaustur (try to pronounce that!) so I was glad we could do more this time. On our way i just had to show Niccola the famous Skogafoss waterfall, Dyrholaey and Vik’s Black Sand Beaches. In Kirkjubaerjarklaustur we took the road (didn’t go there last year) to Fjaðrárgljúfur canyon. A really impressing place, but we were there in full midday sun, and the lighting was not super good for photos.

Further down the road, we hiked up to Svartifoss Waterfall in Skaftafell NP. This waterfall got me silent. Fed by ice-cold meltwater from the Svinafellsjokull glacier and tumbles down 20 metres over a cliff which is bordered on both sides by tall black basalt columns, resembling pipes of a giant organ, which is where the waterfall gets its name. The hexagonal columns were formed inside a lava flow which cooled extremely slowly, giving rise to crystallization. (right below is Svartifoss, left is me enjoying some splashes of Seljalandsfoss…)

We finished the wonderfull day (damn that weather was nice) with the crème de la crème of our trip. Something I had dreamed of: sunset at Jökulsarlon. I can’t describe how we both felt. I almost cried. I had seen so many beautiful pictures of this place, but nothing can’t even describe the beauty of it. We played with the sun flares, had a mini photo shoot and enjoyed the sun dipping under the ice with an Icelandic Beer. 200m further, at the other side of the bridge is also super stunning, ice blocks are floating to the ocean while the waves hit them, and at sunset, this apparently is the place where the fish is, considering the presence of hundreds of seagulls and other birds, ànd seals!

That night we saw that the aurora forecast was between 50 and 60% chance. The Dutch family in our super cosy cottage persuaded us to go out that night and go aurora hunting, at Jökulsarlon. After a short doubt, we packed our gear, extra battery, tripod, some cookies and blankets. We parked our car at the pitch black lake, surrounded by a dozen other enthousiasts, and waited. Waited more. Saw clouds coming in. Waited longer. Nothing. We drove back around 2AM and enjoyed a longer sleep than usual. The day after was again super beautiful. We saw wild reindeer in the morning, and did some small detours, went to a desolated glacier (don’t recall which one) and after some good drives we arrived back at Skalakot, where Nicole and her friends were waiting for us.

We had promised them to take them to the Secret Pool. None of the girls had ever been there during their stay at the farm, and it was literally 10min drive. I was here last year already, so I knew the road. We had a pint in the pool and the girls were super excited with their little trip out!

After a shower at the farm (this hot pool water stinks like ammonia, haha), we cooked and had such a fun night with all the girls who were working at the farm. And just at that moment when we changed into our pajamas for a good night sleep, it was Nicole shooting from downstairs. “Northern Lights, Northern Lightssss!!!!!!”. Aaaaaaarrrrrrrhhhhhhhhh. It was a funny sight. We changed back into warm clothes, grabbed tripod and camera, and went out. It must have been the excitement, cause at the field where we were standing, I lost a screw of my tripod, so f****ck, why the hell do I mess with my tripod outside?! Long story short, for the 4 minutes the Aurora lasted, I don’t really have a good shot. But hell yeah, now at least I know where to look for!

This unfortunately was our last day. The  next day Niccola en I headed back to the airport, where I dropped her of. I still had a shoot with Linda, which I did that evening at my beloved Reykjanesviti. I was wrecked, but afterwards I was very happy with the series. I had a short night sleep in Keflavik and took my flight the next morning.

Here a small Behind The Scenes that Niccola took – me during the shoot with Danai and Nicolas at the beginning of our trip.

I’m not satisfied with the two times I was in Iceland. There is so much more to explore. So Watch Me. I WILL BE BACK!

This website uses cookies to improve your experience while you navigate through the website. Out of these, the cookies that are categorized as necessary are stored on your browser as they are essential for the working of basic functionalities of the website. We also use third-party cookies that help us analyze and understand how you use this website. These cookies will be stored in your browser only with your consent. You also have the option to opt-out of these cookies. But opting out of some of these cookies may affect your browsing experience.
Necessary Always Enabled
Necessary cookies are absolutely essential for the website to function properly. This category only includes cookies that ensures basic functionalities and security features of the website. These cookies do not store any personal information.
Non-necessary
Any cookies that may not be particularly necessary for the website to function and is used specifically to collect user personal data via analytics, ads, other embedded contents are termed as non-necessary cookies. It is mandatory to procure user consent prior to running these cookies on your website.
SAVE & ACCEPT